The Morrison government has missed the chance to boost public schools, provide for the future and provide much-needed economic stimulus to communities across the country.

Thousands of public schools are in dire need of new buildings or urgent maintenance, but the recent federal budget ignored their plight. Meanwhile, rapidly growing enrolments are putting pressure on schools struggling to find space.

Instead, the budget confirmed the $1.9 billion to be spent on private schools over the next 10 years.

AEU federal president Correna Haythorpe says it was a missed opportunity to improve public school buildings, which have a positive effect on teaching and learning, and provide a boost to communities through the increased economic activity that new building work brings.

“A similar approach taken during the global financial crisis reversed the decline in construction and supported approximately 120,000 jobs over the life of the program. At the same time, it provided libraries, classrooms, canteens, specialist language laboratories, science labs and sporting facilities to schools across the country,” - Correna Haythorpe

“Yet the government is happy to hand out billions of dollars to high-fee private schools for second swimming pools, mock medieval libraries and retractable orchestra pits,” she says.

Increased funding to the private school sector has been a slow and incremental shift, according to a report release in March, The School Money-go-round, which puts school funding under the microscope.

An “accumulation of deals and dalliances engineered by politicians and sectoral interests” have supported the move in the absence of any defining agreement or legislation, says the report by Chris Bonnor and Rachel Wilson.

“Any proposal made 50 years ago to equally fund both a public education system and a competing private system would have been greeted with disbelief and derision. Yet we are almost there,” the report says. 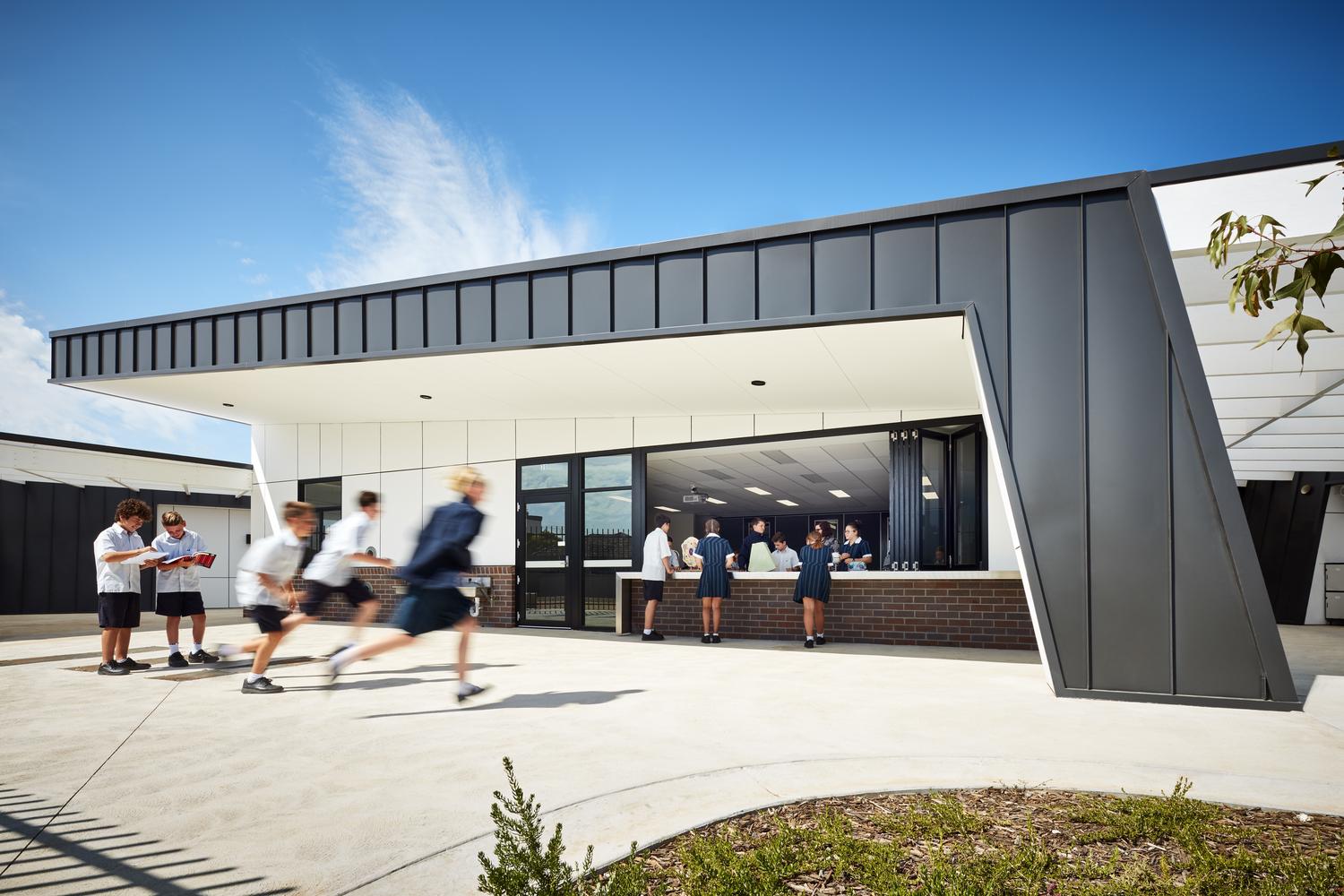 Students who started at Essendon Keilor College’s Niddrie campus in Melbourne last year will never know how different their learning experience could have been. But for the teachers who work there, every day is better.

Adamson and his team worked closely with Hassell Architects to design a building specifically for teaching the middle years curriculum. “It’s got flexible spaces that we can open up for larger groups of students, or we can close them off for use as normal classrooms. It was designed to cater for a range of teaching and learning techniques,” says Adamson.

The focus on STEM (science, technology, engineering and maths) is also evident with various technology tricks and resources to keep the building relevant.

“We wanted to design a building that would be there in another 30 years and would be usable for new teaching practices in the next 10-20 years,” says Adamson.

But it wasn’t an easy path to last year’s opening ceremony. Adamson spent seven years on media campaigns and lobbying governments to get the funds to replace the old campus – a light timber construction built in the 1950s.

“We couldn’t use some of the rooms because the ceilings were falling in. We were worried the glass was going to fall out of the windows because the window frames were rotten. And there were drainage issues, heating and cooling issues and rising damp. It was well past its use-by date,” he says.

When the funds were eventually allocated, they weren’t enough to cover the cost and the school was forced to dip into its savings to make up the difference. The extra cash was needed to complete construction of a canteen and provide the necessary audio visual and lighting equipment for a new theatre.

“That was money we’d saved over seven or eight years to cover the expected shortfall on future building works,” says Adamson.

The school is now turning its sights on its other two campuses. One is served by a 110-year-old heritage building in “reasonably good” condition. But the other, a 50 year-old building, won’t be fit-for-purpose within five to 10 years because of expected enrolment increases, he says.

“We’re going to need a new building there. The department is aware of that but there’s no program as such to build it.

“But there ought to be long-term planning to allocate funds to make sure buildings are kept up to a certain standard. If they are not at that standard, then they should be replaced automatically. It shouldn’t get to the point that a building is so bad that it’s almost uninhabitable before it gets replaced,” he says.

On his wish list is also adequate funding to complete entire jobs. “So, if you are going to build a theatre, you build a theatre with all the bits and pieces that go with it.”

Adamson would also improve his school’s grounds if he could. “They’re in very poor condition because we don’t have enough money to put in sprinkler systems to water the ovals or replace concrete paths broken up by tree roots.”

“It’s the basic things. We’re not asking for underground carparks or swimming pools, we’re asking for the things you need to run a school properly,” - Principal David Adamson

The first new school built in inner city Brisbane in 50 years is breaking new ground in more ways than one.

The $100 million stage one of Fortitude Valley State Secondary College opened this year for Year 7s with 140 students. By the time stage two is complete in 2023, there will be 1500 students – an average of 250 in each year.

The surrounding area, known for its nightlife, is changing face as high-rise developments – offices and apartments – fill the skyline. Principal Sharon Barker says the area is becoming home to many creative businesses.

“Also, some of the biggest engineering firms in Queensland are in the valley and there are a lot of technology firms. It’s quite a dynamic place to be and we’re in the middle of everything,” she says.

The school’s ethos mirrors its vibrant surroundings and is inspired by its own architecture, says Barker.

“Our vision and values statement is, ‘Creating a community of agile learners who are bold, resilient and kind’. One of the reasons we chose bold was because we were being given this beautiful bold building and we needed to live up to that. We couldn’t come into this completely unique space and just do what everybody else is doing,” she says.

The site was originally the home of a 160-year-old primary school, which was closed to make way for the new secondary college. The development includes the renovation and extension of the historic building for use as a performing arts centre as well as the seven-storey building that will eventually accommodate Years 7, 8 and 9. Senior classes will be housed in a new building as part of stage two, which will also include a sports stadium and several specialist classrooms.

The vertical building includes three levels of general classrooms with four classrooms on each level that can be opened into a single space. The room dividers are made of glass and double as whiteboards.

The latest technology is embedded into the architecture and the pedagogy. All students and teachers have tablets, and large screens in each room allow work and resources to be easily shared.

“The technology is probably one of the best decisions we made. The amount of time it saves in terms of teaching and learning is phenomenal,” says Barker.

“One teacher, who’s been teaching for 25 years, a brilliant teacher, had never turned on an iPad before. He says he now gets through far more work in class because he’s not collecting textbooks and handing out photocopies. Teachers are airdropping work between students.”

Working in the new space has raised expectations, says Barker. “We’re redesigning our pedagogy and taking a different approach to the way we’re delivering curriculum because we’ve got this amazing space that we work in.

“We should all be aspiring to have this level of infrastructure in our public schools,” says Barker who describes herself as a “very proud” public school principal.

“Having this building here as a flagship school is a great nod to public schooling. But I do acknowledge that – having been in a school that was 100 years old with one building that had sunk six inches – we’re not all at the same level in terms of what we have.”

Upgrading the remote Alekarenge School in the Northern Territory presents unique challenges that its leadership and community are determined to meet.

“The amount of help and support we’ve had, once people saw what was going on, has been great. The school staff, the community and the AEU have all been pushing hard. There was a lot of support from the department as well, when it was brought to their attention,” says Kiel.

Dilapidated school buildings and outdoor equipment at Alekarenge remain a major concern. Some buildings containing asbestos have been condemned but not yet removed from the site.

“The whole school has had asbestos at different times, and it’s been taken out of some areas and not others. But there is one building that’s of concern and that’s been earmarked to be removed this year,” says Kiel.

The recent works have made some dramatic improvements. Maintenance on the perimeter fence means children are no longer forced to eat their lunch indoors or in a makeshift outdoor “cage” to protect them from wild dogs looking for food.

Live electricity wires that were hanging under “temporary” buildings installed in the 1970s have been removed, rusting and dangerous ramps and walkways have been repainted, and broken toilets have been replaced.

A work in progress

While there is still a lot of work to be done, Kiel is happy to report progress on many of the most urgent matters.

But what’s capturing attention in the community is the expected arrival early next year of three new prefabricated buildings, worth $300,000. They will be a short-term replacement for three 50-year-old buildings.

“It’ll be very exciting to get some new builds and make it a place the kids will be proud to come to and the community will be proud to have and show off. It’ll really lift spirits,” Kiel says.

“We need a new office, new staff facilities, a whole lot of things, but they won’t come straight away. They’re in the 10-year plan and the budget hasn’t been allocated. So, they’re giving us these three temporary builds to hold us over until that funding can be found,” he says.

Kiel is also hoping next year will see an upgrade for the preschool and its playground. “The design’s gone out to tender. It was meant to start in June this year, but COVID got in the way.”

In the meantime, Kiel says Alekarenge’s teachers are doing “fantastic” work with the students in the school’s newest classrooms. These 10-year-old buildings are also due to be replaced, but Kiel says they are the lowest priority right now.